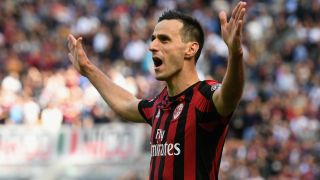 AC Milan's Nikola Kalinic has been in talks with Atletico Madrid and Sevilla regarding a transfer according to sporting director Massimiliano Mirabelli.

Kalinic, 30, scored only six goals in 31 Serie A appearances last season, following his move from Fiorentina.

And it seems Milan are already happy to cut their losses on the forward, who arrived on an initial load deal with an obligation to buy for €25million.

Speaking to Sky Sports Italia, he said: "We have many top players and some of them have received a few offers. Kalinic is also wanted by many clubs, Atletico and Sevilla are the closest teams right now."

Nikola Kalinic wouldn't come on for against , so coach Zlatko Dalic sent the forward home...June 19, 2018

Kalinic has already had a turbulent close season, having been sent home from Croatia's World Cup squad after reportedly refusing to come off the bench in their opening victory against Nigeria.

In his absence, Croatia have reached the quarter-finals, where they face Russia on Saturday.