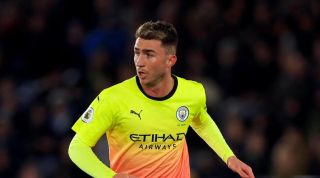 Aymeric Laporte has played down rumours that he could leave Manchester City due to their Champions League ban.

The reigning Premier League champions have been banned from European competition for two seasons after being found guilty of breaching UEFA's Financial Fair Play regulations.

However, City have already announced that they will appeal the verdict at the Court of Arbitration for Sport.

And Laporte insists he is "very happy" at the Etihad Stadium in spite of the team's probable absence from the Champions League.

“We are waiting for a final decision. We are going to see what happens next season," he told The Times.

"Obviously it would hurt us a lot if we aren't in the Champions League next season.

"I am very happy here at Manchester City. I am enjoying my football here. We are doing great things here. In the last two years we have won eight trophies."

With the Premier League on hold until April 30 at the earliest due to the coronavirus pandemic, Laporte is currently training alone.

"That's the best thing for everyone, that we do it every day," the Frenchman added.

"They trust in you and you have to be professional. You have to follow what they say and we have to be responsible in this case.

"When we return to normality, when we start training again outside, we have to be ready.

"We have the same protocol as has been given out in all countries: stay at home as much as possible, don't go out in the street, don't shake hands with anyone.

"If you go to the supermarket and you see someone you know, say hello to them, but don't shake their hands or get close to them."

City are currently second in the Premier League table, 25 points adrift of runaway leaders Liverpool with 10 games left to play.

What now for Saturdays at 3pm? Watch the France 98 World Cup Final with us