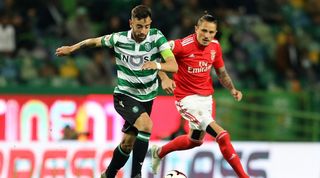 The Portugal international has been regularly linked with a summer move to the Etihad after an impressive season in Lisbon, while Manchester United have also been linked with the 24-year-old.

Jornal de Noticias has now reported that Fernandes is close to a €50 million move to Pep Guardiola’s side.

City are said to have offered the sweetener of letting Moreno go the other way for just €3 million.

The Colombian joined the Premier League club in 2016 but has failed to make any impact on the first team and struggled during loan spells with Deportivo La Coruna, Girona and Flamengo before joining Mexican side Santos Laguna on another temporary deal in January.

The two deals would be separate, but Moreno’s sale is linked to speeding up Fernandes’ switch to Manchester.

City are understood to want to install a 35-50% sell-on clause in the deal, which Sporting have no intention of agreeing to, but the expectation is that an agreement will be reached.

Fernandes has caught the attention of Europe's top clubs this season after scoring 19 goals from midfield for Sporting in 31 league appearances.