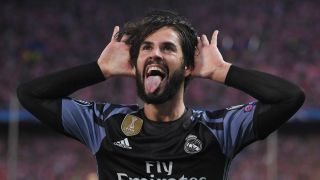 Real Madrid coach Zinedine Zidane was in no mood to confirm whether Isco or Gareth Bale will start in Saturday's Champions League final against Juventus, but suggested that both players could make his XI.

Although Isco has been in sublime form in the closing stages of the 2016-17 campaign, the Spain international is in danger of losing his starting berth to Bale following the Welshman's return from injury.

Bale has not featured since the LaLiga defeat at the hands of Barcelona on April 23, but recently resumed squad training after shrugging off a calf problem.

"It is a difficult decision. I have 23 players and I can only pick 11. Some players who have had an extraordinary year might not make the starting XI, this is the hardest thing for me," Zidane said at a news conference on Tuesday.

"It is only normal there is a debate about whether Isco or Bale will start because they are both great players.

"We are happy that Bale has recovered and is with the team again. Bale is hugely motivated to play because the final is in Cardiff. But all the players will be motivated.

"Isco and Bale can play together. They have done so a number of times this season. They are both in good form heading into the final, although Bale has played fewer minutes.

"We all know what Isco can do and how he has performed in the last few months. He deserves to play in the final, but so do all the others. They all deserve to play, but they cannot all play."