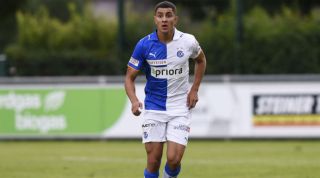 Chelsea have registered an interest in Arigoni but face serious competition from Barcelona, according to Blick.

The 21-year-old has made 15 league appearances this season and his blistering pace has helped him provide five assists for teammates.

It's reported that Chelsea and Barcelona lead a host of clubs after Arigoni's signature.

But it appears that Barcelona are the furthest along in their approach for the Swiss right-back.

It's understood that Barcelona legend Jose Mari Bakero has travelled to Switzerland to watch Arigoni in the flesh.

Arigoni came through the ranks at Ticino Under-18s, where he was already regarded as one of the fastest players of his age group.

The Swiss national has notched 35.1kmph on the clock this season, which allegedly makes him the fastest defender in the country.

The speed is similar to that of Achraf Hakimi, Real Madrid's loanee at Borussia Dortmund, who is said to be the fastest in the Bundesliga.

Barcelona already have Nelson Semedo on the right side of the defence, but appear very convinced by Arigoni's potential.

Meanwhile, Chelsea's young right-back Reece James has just signed a contract extension keeping him at the club till 2025.

Quiz! Can you name the Chelsea vs Liverpool line-ups from 2008?

Quiz! Can you name every club to win Serie A?