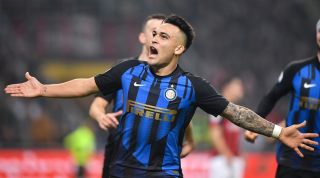 According to Calciomercato, Barcelona are positive they can sign Martinez from Inter Milan.

The Catalan giants have had Martinez in their sights for a while now and stepped up their interest after Luis Suarez suffered a serious injury.

Barcelona director Eric Abidal stated that Martinez is the type of player Barcelona are following.

"[Martinez] is a complete player," he said

"I think he's playing at a very good level. He is a player we are aware of, and we know of his quality, but there are also other players with these same characteristics."

It was widely believed that Barcelona may sign a striker in January but they failed to do so.

The caveat is that the signing has to be from within La Liga, so Martinez was out of the question.

However, it seems Martinez is very much still on La Blaugrana's radar and they may well make their move in the summer.

However, the La Liga champions are reluctant to pay his £92million release clause and will have to reassess.

It's believed that Barcelona will seek to restructure the fee and pay it in instalments.

Inter may even see some Barcelona players such as Arturo Vidal head in the opposite direction as part of any deal.

Martinez has scored 11 goals and provided 3 assists in Serie A so far this season.