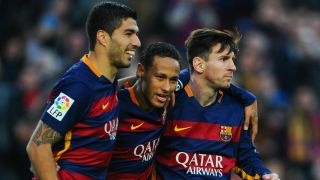 Barcelona's final match of 2015 sees them return to domestic action with a home La Liga game against Real Betis, having been crowned world champions.

A successful trip to Japan saw Luis Enrique's men beat River Plate in the Club World Cup final to win their fifth trophy of the calendar year, and they will present all of their silverware to the Camp Nou crowd ahead of Wednesday's match.

Prior to their Club World Cup activities, though, Barca had been held to league draws against Valencia and Deportivo La Coruna.

As a result, they go into the latest matchday level on points with Atletico Madrid at the top of the table and just two clear of Real Madrid, although they do have a game in hand.

Betis have lost their past four meetings with Barca, but the visitors will have some confidence as they have suffered only one defeat in their last seven La Liga away games this season.

Pepe Mel's men are 11th in the table, within six points of Deportivo in sixth spot.

Midfielder Alvaro Cejudo is hoping Betis can boost their chances of challenging for a European spot with a shock win over the champions.

"We know it is difficult and complicated to beat Barcelona, but in football you can make surprises," he told the club's website.

"We have a nice opportunity and we will try to raise ourselves and produce a game that makes them find it difficult so they cannot be comfortable and then we have Ruben [Castro] who usually scores a goal against them."

The match is set to see Lionel Messi make his 500th appearance for Barcelona in all competitions and he will hope to mark that in style after scoring a double four times in his last six matches against Betis, including the last encounter which saw his side win 3-1 in April.

Goals look like a safe bet at Camp Nou, with both Barca and Betis scoring in every one of the last nine La Liga matches they have played against each other.