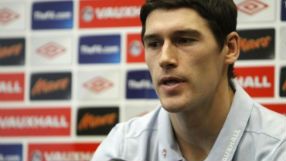 Newly re-instated captain John Terry was one of five players released from the squad following the 2-0 Euro 2012 Group G qualifying win over Wales at Cardiff, and with Rio Ferdinand and Steven Gerrard out injured, Barry will take the armband against the World Cup quarter-finalists.

Barry, who has won most of his 45 caps under Capello, did not play against Wales and was not among the substitutes either.

"He is a good player, he has played most matches for me and is a good captain, he is also the one with most caps," the Italian told reporters after training at a sunny Wembley.

Capello was quoted on Saturday as saying he would make 11 changes for the game, but on Monday said he would probably make seven.

He has allowed Terry, Frank Lampard and Ashley Cole of Chelsea, Wayne Rooney of Manchester United and Michael Dawson of Tottenham Hotspur to return to their clubs ahead of next week's Champions League matches.

"For them to play four matches in 10 days would be too much," he explained. He confirmed goalkeeper Joe Hart would start but that Robert Green, who has not played for England since his blunder against the United States in the World Cup, could appear later.

He also said that Phil Jagielka, Gary Cahill, Leighton Baines and Andy Carroll would start the match as would Scott Parker if he was fit.

Teenager Jack Wilshere, who had a fine game partnering Parker in the centre of midfield against Wales will also probably play with Capello continuing to experiment with a 4-3-3 shape rather than his traditional 4-4-2.

"It will be three in the midfield," he said, adding he would not finalise the rest of his lineup until Tuesday.

"If Parker is fit he will play," he said. "He's got some little problem but I hope he will be fit."

England have played 16 matches against African opposition, winning 11 and drawing five and Tuesday's match will be their first against Ghana, who beat Congo 3-0 in an African Nations Cup qualifier on Saturday.

The match is a near 90,000-capacity sell-out with more than 20,000 Ghanaian fans expected and Capello said that although fans would not see a full-strength England team, they should still be looking forward to the match.

"It's really important for the players to understand the spirit of the team and I hope tomorrow we can see the spirit on the pitch like in the first 30 minutes against Wales.

"It will not be easy. Ghana are a very good team and it is going to be a tough game."

Ghana arrived in London on Monday after a long flight from central Africa after their comfortable win in Brazzaville kept them top of their African Nations Cup qualifying group with goals from Prince Tagoe, Dominic Adiyiah and Sulley Muntari.