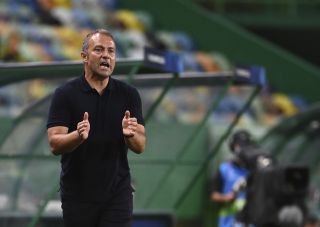 Bayern Munich boss Hansi Flick will stick with his winning formula despite the attacking threat posed by Paris St Germain in the Champions League final.

Many pundits feel Kylian Mbappe, Neymar and Angel Di Maria will punish the German champions if they continue to play with their renowned high defensive line in Lisbon on Sunday night.

But Flick said at the pre-match press conference: “In our games over the last 10 months we’ve always tried to impose our style on the opposition and always played with a high line.

“Ultimately we’ve got results doing that, so we won’t change too much on that score.

“What we’ve noticed firstly is the fact we’ve had this high line, we don’t necessarily want to give too much space to the opposition, but of course there’s quite a lot of space in behind our defensive line.

“What is important is we can press the opposition when we are in possession, we have to make sure we can cover all that ground when it goes behind.

“It’s important to cut out those passing lines and not give our opponent space to pass the ball into. They have pace and are a top team with incredible players.”

Defender Joshua Kimmich will be among those tasked with keeping PSG’s front three at bay.

“We don’t know the starting XI at this stage but I think I’m going to play right-back,” he said.

“It might be Neymar and Mbappe on the right, they are very good going forward. But I don’t think we are going to sit too deep by any means.

“They have an enormous amount of pace that we will have to look out for, but we won’t shy away from it.”

🎙️ #Kimmich on the opposition: "Against Leipzig, @KMbappe played in attack, with @neymarjr on the left. They have an enormous amount of pace that we will have to look out for, but we won't shy away from it.“#UCLFinal#MissionLis6on#PSGFCBpic.twitter.com/77ZzswsmZm— FC Bayern English (@FCBayernEN) August 22, 2020

Bayern are attempting to lift Europe’s top trophy for the sixth time, having last been crowned champions in 2013.

“When you play at club level there’s no greater honour,” added Kimmich. “As a child you are always very happy to watch the Champions League.

“Unfortunately the competition has been played behind closed doors, but it’s a huge opportunity we really want to seize tomorrow night.”