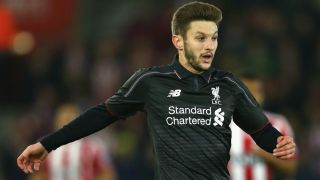 The Liverpool midfielder believes victory over United could be the catalyst his club needs to springboard into the top-four.

"This was always going to be a big week for us and if we can get three points from the next game I would say it has been a successful one," Lallana said.

"We played so well against Arsenal we were a bit disappointed to only get one point, but if we can beat United it puts us right back in the mix.

"The results went our way to an extent in the week but even so, the draw against Arsenal felt like two points dropped. It would have been even more disappointing had we not taken anything from the game, though.

"We need to take our momentum and confidence into the United game, because it feels like we keep getting within touching distance of the top four and then taking a step back."

Lallana is particularly hungry for a result against Liverpool's bitter rivals after September's dismal 3-1 defeat - which proved to be one of Brendan Rodgers last games in charge of the club.

"United beat us twice last season and we didn’t put in a great performance at Old Trafford in September, so we definitely owe them one," Lallana said.

"We’ve done well against the big teams this year. We’d like to keep that going and especially against United.

"This is an opportunity we need to take. It is going to be a huge game, a great atmosphere, and that normally brings out the best in us."