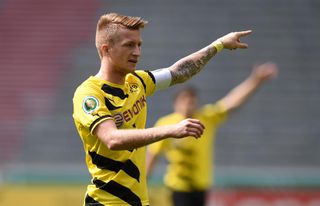 Reus has been heavily linked with a move away from Dortmund, with Bayern, Spanish giants Atletico Madrid and Real Madrid as well as the Premier League's Manchester United all credited with an interest in the 25-year-old.

Earlier this month, Bayern chairman Karl-Heinz Rummenigge drew the ire of the Dortmund hierarchy by revealing that Germany star Reus has a buy-out clause of €25 million written into his contract that comes into effect next year.

Dortmund chief executive Hans-Joachim Watzke hit back by accusing Bayern of trying to cause disruption.

Now Bayern legend Beckenbauer, currently serving as the Bavarians' honorary president, has risked stoking the flames of the fall-out again, expressing his confidence that Reus will be heading for pastures new in 2015.

"I can imagine him at Bayern very well," he told Bild. "If you can get a player of his class, you need to try it.

"I am sure: if he doesn't go to Bayern in 2015, he will probably go to another big international club such as Real Madrid or Manchester United. Dortmund are unlikely to be able to hold on to him."

Dortmund have lost two of their key players to German champions Bayern over the last 12 months, with striker Robert Lewandowksi following Mario Gotze to the Allianz Arena in July after agreeing a pre-contract with Pep Guardiola’s men in January.