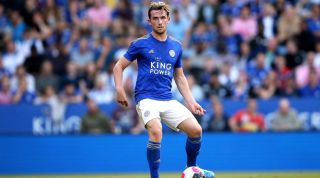 The England international has been linked with a move to Old Trafford as part of a £130 million double swoop by the Red Devils for the left-back and his Foxes team-mate James Maddison.

However, the Mail Online reports that Chelsea are the frontrunners to secure the defender’s signature – despite currently facing a transfer ban.

The Stamford Bridge club are midway through a two-window ban from signing players, which was enforced by world football’s governing body FIFA after they were found guilty of breaking rules on signing youth players.

But Chelsea are understood to have made Chilwell a major target once they are free to bolster their ranks again.

That could be as early as January if they are given permission to make signings again, which would only be possible if their appeal to the Court of Arbitration for Sport is successful and the ban is overturned or reduced.

As it stands, the Premier League club still don’t have a date for their appeal to be heard.

Chilwell is tied down on a deal at the King Power Stadium until 2024 after putting pen to paper on fresh terms last summer.

The 22-year-old has attracted the interest of Manchester City in the past after his impressive emergence at Leicester.

City eventually changed their plans but Chelsea are now poised to make the Englishman their long-term solution on the left side of defence.

He earned his senior England debut under Gareth Southgate in September 2018 and has since become a regular for the national team.

The defender was named in Southgate’s squad for the upcoming Euro 2020 qualifiers against Czech Republic and Bulgaria, where he could add to his eight caps.