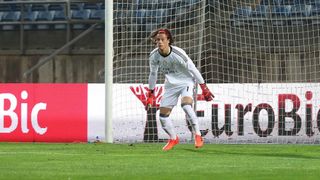 At 18 years and 52 days old, Belgian Svilar breaks the record of legendary Spanish goalkeeper Iker Casillas, who made his debut for Real Madrid aged 18 years and 118 days.

Svilar joined the Portuguese side in August from Anderlecht and was named as a substitute against Maritimo eight days ago.

Countryman Romelu Lukaku, scorer of 11 goals in as many United games before Wednesday's fixture, was named in Joe Mourinho's line-up.