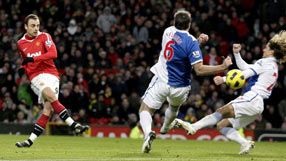 With a performance that delighted manager Sir Alex Ferguson as much as it dismayed those who had dropped the Bulgarian from their fantasy football selections, Berbatov ran riot in a 7-1 drubbing of Blackburn Rovers at Old Trafford.

"We've been waiting for that performance for weeks," Ferguson told Sky Sports television after his side's best result of the campaign so far.

"It was a fantastic achievement. It's only Andy Cole that has managed that in my time here and that was a long time ago, 15 years.

"He could have scored a sixth actually, his header was saved by (Paul) Robinson near the end.

"There was some great football attached to those goals and getting off the mark early helped him of course because he hadn't scored for 10 games. And that does prey on strikers' minds because that's the way they are," added Ferguson.

Apart from Cole - who scored his five for United against Ipswich Town in 1995 - and Berbatov, only Alan Shearer and Jermain Defoe have scored five in a game since the Premier League started up in 1992.

Berbatov had last been on the scoresheet when he hit a hat-trick against Liverpool in September and Saturday's five sent him top of the Premier League scoring chart with 11 goals, two more than Manchester City's Carlos Tevez.

Failing to make even the bench for United's previous game against Wigan Athletic, the club's record signing scored twice before the break and had wrapped up his hat-trick with the second half barely underway.

"I have scored five in a match before but it was a long time ago back home in Bulgaria... to stand alongside the likes of Shearer and Cole is a great honour.

"The first one (goal) was probably the most important," he added. "It gave us the confidence to go on and play the way we know we can."

Just as pleasing to Ferguson was the way the Bulgarian linked up with England striker Wayne Rooney, making his first start since early October when he talked of leaving the club.

Rooney nodded the ball down for Berbatov to volley home from close range after 71 seconds and they linked well all afternoon.

"I think it was a good combination today, they interchanged play tremendously well today and they were aware of each other's positions. It was a really, really good performance," said the manager.

"Wayne did fantastic today considering it's only his second game back."