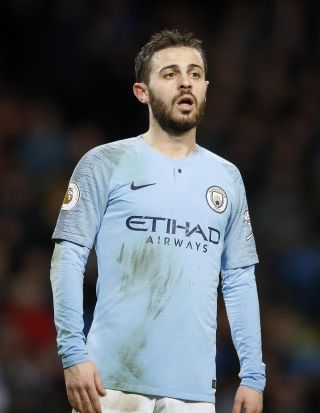 Bernardo Silva put on a brave face and tried to switch focus back to the title race following Manchester City’s Champions League heartache.

City saw their hopes of conquering Europe and winning an unprecedented quadruple this season end in a dramatic quarter-final clash against Tottenham at the Etihad Stadium on Wednesday.

City thought they had snatched a 5-3 victory, which would have taken them through 5-4 on aggregate, through Raheem Sterling in injury time but his strike was ruled out by VAR.

Instead Spurs went through to a last-four clash with Ajax, despite a 4-3 loss on the night, courtesy of the away goals rule in a 4-4 aggregate draw.

“We are very disappointed,” said Silva, one of City’s scorers in a sensational game that opened with five goals inside a pulsating first 21 minutes.

“Obviously we wanted to qualify for the semi-finals. We’re disappointed with the result and the way we conceded the goals but I think the way the team played was very good. It was fantastic, especially after (being) 2-1 behind.

“It’s not a very good feeling to have but that’s football. Now we have to focus on the Premier League and FA Cup. We will have to forget about it and go for the competitions we are still in.”

City, beaten 1-0 in the first leg, levelled the tie when Sterling struck after four minutes but Spurs roared back with Son Heung-min scoring twice in quick succession. Silva then equalised and Sterling put City back in front in a frantic opening.

Sergio Aguero put City in command of the tie after the break but Fernando Llorente swung it back in Spurs’ favour when bundled in another goal from a corner after 73 minutes.

There was debate over whether the ball had hit Llorente’s arm before bouncing in off his hip but the Spaniard was given the benefit of the doubt after a lengthy VAR check.

VAR then came to Spurs’ rescue again in injury time after Sterling thought he had completed his hat-trick in the most dramatic fashion, ruling Aguero offside in the build-up.

Silva said: “I think VAR is a good thing because it helps the referee make better decisions, so no problems with the VAR.

“Obviously I have had the opportunity to watch the last goal from Tottenham and the ball hits the hand, no doubt about that, but the referee takes his decision and we have to respect that.”

This could still be a memorable season for City. They have already won the Carabao Cup and are through to the FA Cup final.

They will retain their Premier League title if they win their remaining five games, starting with another visit from Spurs on Saturday.

Thank you to each and every one of you for the amazing support tonight 💙— Manchester City (@ManCity) April 17, 2019

Silva said: “It’s not time for revenge, it’s time for another competition, time to keep us alive in the title race.

“We will try to win the game in the same way we did on Wednesday but knowing that we are playing against a very good team and that will make it difficult for us.”