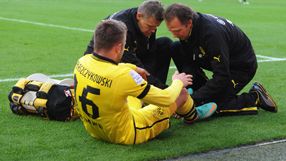 Dortmund also said in a statement on Monday they would be without central defender Mats Hummels for two weeks after he hurt his leg in Sunday's 1-1 Bundesliga draw against Hannover.

Hummels has been replaced in Germany's squad by Heiko Westermann of Hamburg SV for the World Cup qualifiers against Ireland on Friday and Sweden four days later.

Westermann has not played for his country since the goalless draw with Sweden in November 2010.

Poland captain Blaszczykowski, who turned his ankle in the 39th minute, will also be sidelined for Friday's friendly international against South Africa.

Champions Dortmund, who are fourth in the Bundesliga table nine points off leaders Bayern Munich, face Real Madrid in the Champions League on October 24.