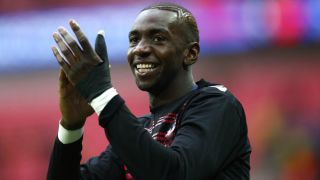 Yannick Bolasie hopes Crystal Palace can pull off the signings of Saido Berahino and Christian Benteke this transfer window.

Reports suggest Berahino is the subject of interest by Palace, while they have also been linked to a £25million move for Liverpool's Benteke.

However, Palace may have competition for West Brom striker Berahino, with Stoke City reportedly also interested in the 22-year-old.

But Bolasie hopes Berahino can sign a deal at Selhurst Park before Palace and West Brom do battle at the stadium in their Premier League opener on August 13.

"I know Saido and he would be a good signing," Bolasie told Sky Sports after scoring in Palace's 3-2 friendly win over AFC Wimbledon on Wednesday.

"I think he's a top lad. Everyone gets him a bit wrong but he's a top guy. And obviously Benteke has Congolese origin, same as me.

"It's good to see fresh faces come through the door, especially with what we're seeing in the Premier League so far; the managers that have come in and players coming in from all over the world.

Palace have made three signings so far this pre-season, bringing in goalkeeper Steve Mandanda from Marseille, Andros Townsend from Newcastle United, and James Tomkins from West Ham.