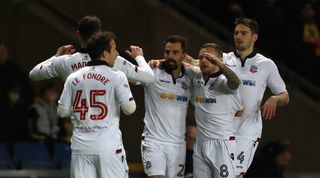 We wrote after Bolton’s 4-0 win over Gillingham in mid-March about how the 31-year-old had been experiencing a career revival after racking up nine assists in three games – including all four against the Gills.

Well, three games on, he’s still going. After striking an 82nd-minute winner for the Trotters against Northampton two weeks ago, Morais followed up with a goal-and-assist combo against Oxford. Then on Saturday he got both assists in the 2-0 win at Shrewsbury.

To save you doing the maths, that means the Portuguese winger has now set up 12 of Bolton’s last 18 goals, and scored two of the others.

Morais only signed for Phil Parkinson's side at the start of February after being released by League One rivals Bradford, but the Portuguese has become a big part of a Trotters team that now hold a six-point advantage over third-placed Fleetwood.