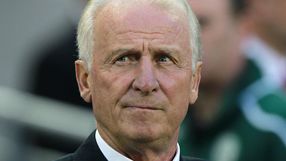 Trapattoni has been under pressure since his side underperformed at Euro 2012 in June and the drubbing by Germany, Ireland's heaviest at home since 1931, has led to calls for his sacking from commentators and former players.

To add to the Italian's headache ahead of Tuesday's World Cup trip to the Faroe Islands, local media reported that defender Stephen Kelly threatened not to board the flight from Dublin after a row with Trapattoni's assistant Marco Tardelli.

The market on Trapattoni not lasting in the job until 2013 was closed after what Paddy Power described as "a torrent of bets".

"The amount of money placed over such a short period would lead us to believe that something is afoot and it's safe to say that we're running scared on this one," Ireland's largest bookmaker said in a statement.

Former coach Mick McCarthy, who is out of work but led the country to the World Cup finals 10 years ago, is rated as the favourite to take over with Norwich City's Chris Hughton and Reading's Brian McDermott next in the betting.