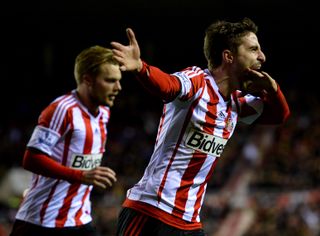 The 22-year-old has been at the Stadium of Light since the beginning of September, scoring three goals in 19 appearances in all competitions for the Premier League strugglers.

But, despite being a regular feat under Gus Poyet, Borini has no intention of remaining on Wearside beyond the end of his current agreement.

"It would be nice to go back there (Liverpool) as a Premier League player and to have shown them that even in a hard situation I can do well," he said.

”I’ve achieved one of my objectives here at Sunderland of playing every week, but to play for big teams like Liverpool, you don’t just need to perform well.

"As a striker you need to score goals. You can perform well, but at the end of the season people count your goals.

"I needed to prove to myself first that I can play here because I’ve never had a long spell playing in England but now I’m getting a long run of games."

However, the Italian, whose previous clubs include Chelsea and Roma, insists his immediate goal is to aid Sunderland's fight against relegation.

"The main aim is to stay up, we can’t think about going down. With my confidence on the rise, hopefully I can help us in that aim," he added.

Sunderland sit 19th in the English top flight, but have lost just one of their last six league fixtures.