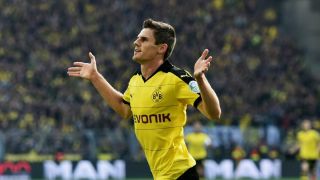 Borussia Dortmund extended their winning streak to 11 matches in all competitions with an emphatic 3-0 Bundesliga win over Bayer Leverkusen.

Thomas Tuchel’s magic touch showed no signs of wearing off at Signal Iduna Park, where Dortmund dominated their embattled visitors throughout a one-sided contest, the result of which was never in doubt from the moment Dortmund found the net.

The hosts played with all the verve and conviction that has turned them into early title contenders, and Jonas Hofmann had the home crowd rocking after just 19 minutes when he latched onto Shinji Kagawa’s long ball to score.

Kagawa turned from provider to goalscorer in the second half, finishing a slick passing move with his second league goal of the season.

Pierre-Emerick Aubameyang made it 3-0 from the penalty spot after Wendell brought down Matthias Ginter in the box, and Leverkusen were left licking their wounds after a third consecutive Bundesliga defeat.

The hosts' early dominance created a number of chances, the best of which came when Henrikh Mkhitaryan made space for himself on the edge of the box and lashed a shot towards goal - Bernd Leno having to be at his best to turn away for a corner.

Dortmund took the lead moments later, when Kagawa's ball over the top evaded the advancing Leno, and Hofmann nipped in behind him and fired into the unguarded net.

The home side delighted a buoyant crowd by dominating possession and dictating the play with the brand of passing football that has made coach Thomas Tuchel a hugely popular figure early in his tenure.

Another golden chance fell to Mkhitaryan when Aubameyang leapt over a pass from Ginter to allow the Armenian to shoot from inside the box, but Leno made a good save to keep Leverkusen in the game.

The visitors did register a shot on target before half-time, when Stefan Kiessling played Kevin Kampl in for a great chance on the edge of the Dortmund penalty area, but his shot was parried away by Roman Burki.

Cracks momentarily started to appear in the Dortmund rearguard, and Javier Hernandez appeared to be pushed in the back as he attempted to shoot when put through by Julian Brandt, but the referee waved play on and the chance was gone.

A second goal was always in the offing, and a stray pass by Wendell allowed Dortmund to move the ball quickly into the box, where Mkhitaryan's flick allowed Kagawa to finish a slick move with an equally cool finish.

Wendell’s afternoon got worse when Ginter got the better of him and he pulled at the German's shoulder, sending him crashing to the ground.

Aubameyang made no mistake from the penalty spot and, in the end, Leverkusen had Leno to thank for sparing further blushes as he saved well from a string of late Dortmund efforts.