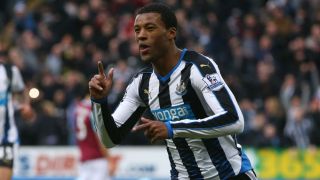 Liverpool have announced the signing of Netherlands international Georginio Wijnaldum from Newcastle United on a "long-term" deal.

The 25-year-old spent just one season at Newcastle after joining from PSV in July 2015, ending in relegation after Newcastle failed to maintain their top-flight status under Steve McClaren and, latterly, Rafael Benitez.

"I'm really excited because Liverpool is a big club with a great history and it's always a dream to play for as big a club as Liverpool," he told the club's official website, before discussing his excitement at having the chance to work under Klopp.

"[He seems] a great man - from the outside - because I don't know how he works yet and I have to work with him.

"[But] I always love to watch him, his passion as a trainer, I like how he enjoys the game.

"He gives something back to the group [with his passion] so I look forward to working with him."

Klopp added: "I think he can be a great player for us. He has already shown some really good moments in his career but the most exciting and important thing for me and my staff is that there is still so much extra to come from him.

"When I talked to him I could tell that he knows we have to work together to get this level out of him to all be successful for the team."

Wijnaldum contributed 11 goals from midfield for Newcastle last term but they all came at St James' Park, with his performances away from home drawing criticism from some supporters.