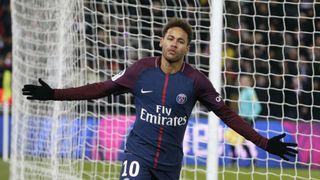 Real Madrid have issued a strong denial after reports in Spain claimed a world-record offer has been made to Paris Saint-Germain to buy Neymar.

The Brazil superstar has been linked with Madrid ever since leaving La Liga rivals Barcelona for PSG last August.

PSG paid a world-record €222million to trigger Neymar's release clause but, although the forward fired the club to a domestic treble, reports have indicated he has failed to settle in Paris.

Spanish public broadcaster TVE reported on Monday that Madrid have offered PSG €310m to bring the Brazilian back to La Liga.

But Madrid quickly hit back at the claims with a statement that denied making any contact with PSG or Neymar over a possible blockbuster transfer.

"Real Madrid has not made any kind of offer to PSG or the player.

"Real Madrid is surprised that Spanish public television has been able to broadcast absolutely false information without anyone from this medium contacting any of the parties to check the alleged information that could easily have been denied."

TVE's report said Madrid would be prepared to pay Neymar €45m a year to tempt the 26-year-old back to Spain.

Madrid are looking to rebuild following the shock departure of Zinedine Zidane after the French coach led the club to three consecutive Champions League titles. He has since been replaced by former Spain coach Julen Lopetegui.

Neymar clashed with PSG strike partner Edinson Cavani on multiple occasions over set-piece duties, refusing to allow the Uruguay international to take a penalty that would have made him the club's record goalscorer.

The Brazilian already had a hat-trick in that 8-0 Ligue 1 demolition of Dijon and, after scoring his fourth of the game from the spot, he was whistled by PSG fans.

Neymar then missed the last two months of PSG's season, including a Champions League clash with Madrid, after fracturing his foot in a win against Marseille.