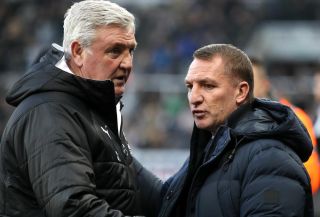 Brendan Rodgers is confident there is more to come from Leicester after seeing them ease to a 3-0 Premier League victory at injury-ravaged Newcastle.

The Magpies played the final 39 minutes at St James’ Park with 10 men after losing Jetro Willems, Javier Manquillo, Jonjo Shelvey and, with all three substitutions having been made, Fabian Schar, but had they remained at full-strength the Foxes might have won just as comfortably.

Rodgers’ men sit in second place in the table, 10 points adrift of runaway leaders Liverpool but with the Foxes’ manager adamant that his team is still a work in progress.

He said: “I remember coming here before with Liverpool and we won 6-0 and played very well.

“We’ve come here today with equally as good a performance, not scored the goals, but certainly with the control in the game and the quality in our game, played very, very well.

“But we can play better. We will improve and the longer we work together – because it’s only been 10 months or so.

“The potential in the group really excites me, but we have to keep that consistency and that hunger to want to be better.”

Having been frustrated by Newcastle, the visitors effectively killed off the game inside three minutes at the end of the first half when first former Magpie Ayoze Perez and then James Maddison made the most of errors by defender Florian Lejeune to establish a 2-0 lead at the break.

Schar’s unscheduled departure six minutes after the restart killed any hope of an unlikely comeback by the home side as they opted for damage limitation, a ploy which was largely successful until substitute Hamza Choudhury wrapped up the points with his first senior goal for the club three minutes from time.

Asked if securing the runners-up spot was the aim for the second half of the season, Rodgers said: “No, it’s finishing as high as we possibly can.”

Opposite number Steve Bruce left St James’ Park wondering if he will be able to field a competitive team at Rochdale in the FA Cup third round on Saturday after seeing his casualty list rise to 10 with hamstring injuries for Manquillo, Shelvey and Schar and a groin strain for Willems, while DeAndre Yedlin played on with a suspected broken hand.

He said: “Look, I said it a month ago, that to ask players to play four games in 10 days, for me, is ludicrous and unfortunately today is the consequence of that.

“I didn’t have the bodies to change because we had four or five missing anyway, so it’s been difficult. But look, I don’t want to make excuses, it is what it is.

“In all the years I’ve been involved, I don’t think I’ve know a crazy 15 minutes like that one. It was just ridiculous, from the goals we gave away to the four players going down with injury, which is always a concern.”