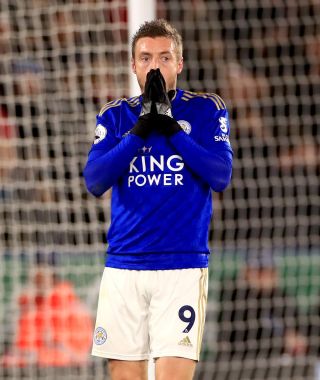 Leicester boss Brendan Rodgers believes Jamie Vardy is getting back to his best despite seeing his goalless run stretch to two months in Saturday’s 1-0 Premier League defeat to Manchester City.

Vardy was unlucky to see an eighth-minute shot come back off the post but was a constant menace to the City defence on the night, with Pep Guardiola revealing Vardy’s pace was part of the reason Aymeric Laporte asked to be replaced just before the hour as he continues his recovery from injury.

Vardy was in electric form at the start of the season, scoring 17 goals before Christmas including a run of netting in eight straight games, but he has not been on the scoresheet since a 3-1 loss to City at the Etihad on December 21.

The 33-year-old has dealt with a muscular injury since then but – despite the lack of goals – Rodgers believes Vardy is coming back to his best.

“After his injury he didn’t play in a few games and it has taken a little bit of time to get back, but he’s back to that ability of his running and his penetrating in behind,” Rodgers said.

“This is as fit as he’s looked since that injury. If he keeps doing that, he’ll get his chances. I’ve no doubts about him and he was very unlucky not to score.

“I think that in each game he’s getting more and more back to himself. (Against City) you could see his threat in behind. He was fantastic and very unfortunate.”

But Rodgers said he could not be too disappointed.

“For a lot of the players it’s new,” he said. “This is a club where for the majority of the time, once you got to 40 points the wheels are out and everyone’s landing. Staying in the division was important and that’s how it’s been.

“But to sustain it and be up there from the second or third week is new for a lot of the players. They’ve coped with it so well, they’re improving all the time and they’re going to get better in their stamina, both physical and mental.

“To be in the position we’re in with 11 games to go, we’d have bitten your hand off at the beginning of the season.

“Of course we wanted to cut the gap to one point but as we stand here today, if the only teams above you are Liverpool and Man City, you’re doing OK.”

And Rodgers hopes the experience of challenging in the top four this season can help should Leicester be competing in Europe next season.

“It’s that mentality you need,” he said. “If you arrive in Europe next year it’s totally different again but it’s all experience and that helps you.

“The season up to now has been a huge benefit for the players, knowing what it takes physically and mentally to be up there.

“Up until now they’ve shown they’ve been good enough and that will help us going forward.”