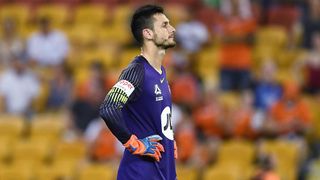 The visitors looked to be cruising to a first win in nine games after Roly Bonevacia and Kwame Yeboah put them into a comfortable 2-0 first-half lead.

Bonevacia continued his fine run of form with a fourth goal in as many matches, before Yeboah lashed past Jamie Young following good work from Bruce Kamau.

Brisbane's attempts to get back into the contest looked futile as Henrique and Adam Taggart wasted chances before Dylan Wenzel-Halls saw a 76th-minute strike ruled out for offside.

However, just when the game looked done, Brisbane staged a dramatic comeback in added time to snatch a point – the second time they have come from 2-0 down against the Wanderers this season.

Substitute Tobias Mikkelsen pulled one back in the 92nd minute, but his first A-League goal only looked like being a consolation until Janjetovic's error.

The goalkeeper was trying to waste time as a long ball headed harmlessly out of play for a goal-kick, but he inadvertently got a touch to concede a corner.

And from Mikkelsen's resulting delivery Taggart rose highest to snatch the unlikeliest of points for the Roar.