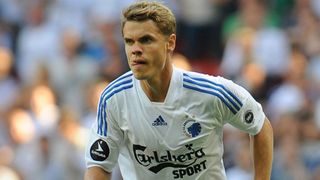 Kristensen, 33, joins the Roar on a one-year deal after spending two seasons with ADO Den Haag in the Eredivisie.

Roar coach John Aloisi was delighted with the signing of the defensive midfielder, after losing Spanish star Corona.

"We believe Thomas will be an excellent addition to our squad," Aloisi said.

"Not only has he represented his country [Denmark] but he has played at the highest level in both Denmark and Holland for many years now."

Kristensen has made nine appearances for his native Denmark - most recently in 2012 - while he also spent over six years at one of the nation's biggest clubs in FC Copenhagen.

"The offer to come to Brisbane is a once in a life opportunity for myself and my family," Kristensen said.

"First and foremost I come here to help the club be successful and win a trophy. I am very excited about this new adventure."

"I have only heard good things about Australia and the A-League from my friend Morten Nordstrand," Kristensen said.

"I now know a bit about the Roar and the championships that the club has previously won."