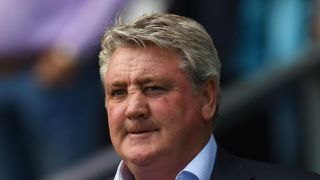 Hull City manager Steve Bruce says it is "flattering" to be linked with the England job and has described the role as the "pinnacle".

Reports on Monday suggested Bruce would hold talks with the Football Association (FA) this week as they attempt to fill the vacancy created by Roy Hodgson's resignation in the immediate aftermath of England's Euro 2016 defeat to Iceland.

He told the Hull Daily Mail: "It's highly flattering and I'm honoured to be linked with it. Whether or not it goes any further than that… It's the pinnacle isn't it? To manage your country, there's no bigger job.

"It's all speculation. There's a lot of people who have written nice things and I'm grateful for that."

Bruce, who led Hull back to the Premier League last season following their relegation 12 months earlier, insists he has not yet been contacted by the FA but hopes the successful candidate is English.

He added: "Not just because I'm English but I hope they do [appoint an Englishman].

"All these lads do their coaching badges, A licences, pro licences, then in my opinion the top of the FA should be English. I've always said that.

"There's no-one more patriotic than I am and to be linked with it is testament to the fact we're in the Premier League and there's only four or five English managers."