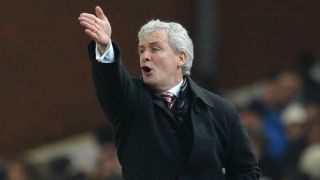 Stoke City manager Mark Hughes feels goalkeeper Jack Butland has the potential to be as good as Arsenal's Petr Cech.

Both keepers were in fine form at the Britannia Stadium in a tight 0-0 draw that sent Arsenal back to the top of the Premier League.

Cech made a double save from Joselu and Bojan, while England goalkeeper Butland twice denied Arsenal striker Olivier Giroud.

"He's having a great season and our feeling is that he'll be of the stature of Petr Cech at some point in the future if he keeps progressing.

"He needs a number of years in the game at this level.

"It's only his first year as a Premier League number one, so it's going to take him time, but in terms of his ability and his natural attributes, that lend itself to him becoming a top notch keeper, he's got that."

The stalemate means Arsenal still have not won at the Britannia Stadium since 2010.

Hughes added: "It was a good performance by both keepers but both sides I thought approached the game in the right manner and it was a decent contest.

"They had a little bit more play in and around our box without really creating anything of note, apart from obviously a number of saves that Jack made, but in fairness we tested Petr Cech at the other end as well so I thought it was an evenly matched game."