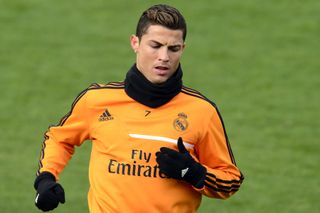 The Portugal international was crowned FIFA Ballon d'Or winner on Monday, having scored 69 goals for club and country in 2013.

The 28-year-old has already found the net 20 times in the La Liga this season and, despite agreeing a five-year deal in September, Calderon does not feel Ronaldo will remain at the Santiago Bernabeu for the remainder of his career.

Ronaldo's new deal came after links with a return to Manchester United in the close-season and Calderon believes his reportedly strained relationship with president Florentino Perez could see him move back to England.

"I do not think he will finish his career at Real," Calderon told The Sun.

"I feel that one day he will return to England. In Madrid, he is pleased with the city and the fans. But I think his relationship with Florentino Perez is not as good as it was with Alex Ferguson at Manchester United.

"Ronaldo loves father figures. With Florentino, he does not have that rapport.

"The relationship is bad or actually non-existent. He stays at Real despite the chairman."