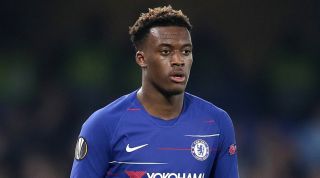 Liverpool have entered the race to sign Callum Hudson-Odoi, but Chelsea manager Maurizio Sarri believes the winger will still be at Stamford Bridge next season.

The England international turned down the offer of a new deal earlier this campaign, with his current contract set to expire in June 2020.

Bayern Munich tried to sign him in January and will renew their interest in the summer, but Liverpool have emerged as a potential alternative destination for the 18-year-old.

Kicker report that the Reds have already made contact with Hudson-Odoi’s representatives as they seek to steal a march on Bayern.

Manchester United have also been linked with the Chelsea academy product, but Sarri believes he will not be going anywhere before 2020.

“I think so [that he will stay],” he said. “I am not able to say if he is going to sign a new contract, but I think he will stay here with us in every case."

Sarri has been criticised for his reluctance to use Hudson-Odoi this term, with the forward still awaiting his first Premier League start.

But the Italian has defended his handling of the youngster and insists he has given him plenty of opportunities to impress.

“He started a lot of matches - probably not in the Premier League, but that's by chance,” he added.

"It's not a problem for me to put him the in starting XI in a Premier League match. He's ready, but I can play only with two wingers. In the squad we have [Eden] Hazard, Willian, Pedro, so it's not very easy to start every match here.”

Chelsea travel to Cardiff on Sunday as they attempt to get their top-four challenge back on track.

FEATUREWhy Bill Shankly and Jurgen Klopp share so much in common