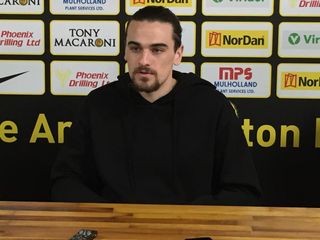 The Cardiff defender joined Livi on a loan spell a year ago but played only six times before his time in West Lothian was curtailed through injury.

The 22-year-old featured in one League Cup game for the Bluebirds last August and made his international debut for Northern Ireland in September in a 1-0 friendly win over Luxembourg.

Desperate for more game-time, he returned to Livingston last month and has played in the last four of five successive victories for Gary Holt’s side.

Ahead of Wednesday night’s trip to Ross County in the Ladbrokes Premiership, Brown told the PA news agency of the circumstances surrounding another move north.

He said: “I know I need game-time and I need to improve.

“I set the bar high so I want to keep improving and playing so the best thing for me is coming back here because I am familiar with everyone.

“It was quite easy to get into the flow of things because I knew the set-up. I enjoyed it last year so it is about building on that.

“I went back to my parent club and with the old gaffer I was in and around the first team, training, included in squads, but I just wasn’t getting enough minutes.

“We just agreed that the best thing to do was go out on loan and get more minutes.

“I am focusing on Livingston, trying to win as many games as we can and get as many clean sheets as we can and when the summer comes go back to Cardiff to prove to them that I am a better player than when I left in January.”