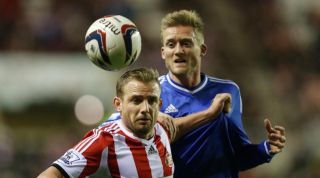 Louis van Gaal's side endured a frustrating start to the Premier League campaign after suffering a 2-1 home loss to Swansea City.

Sunderland, meanwhile, were held to a 2-2 draw at West Brom and are now readying themselves for the opening home game of the new season.

United will be looking for a response at the Stadium of Light against a side that narrowly avoided relegation last term, but Cattermole is in confident mood.

"We know after last year that it's a very long season and we proved that we don't need to be nervous or panic, we are more than capable of competing with teams in the Barclays Premier League," he told the club's official website.

"We have got a way that we want to play and I genuinely think that we are going to get better as the season goes on – starting on Sunday."

Recent results against the Old Trafford outfit offer additional cause for optimism, with Sunderland having prevailed in the last three meetings.

And Cattermole believes the home faithful could make all the difference as the hosts seek a fourth consecutive win over their illustrious visitors.

"I'm looking forward to Sunday – the fans were great at West Brom, as they always are," he added.

"At the moment we're above Manchester United in the table, which is nice, it'll be a tough game but we're at home, the crowd will be up for it and so will the players."