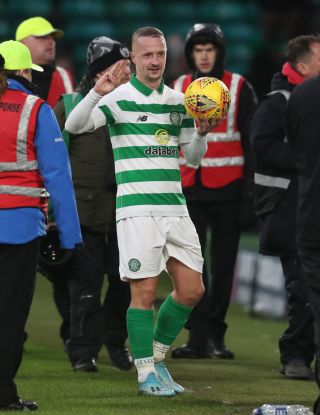 Leigh Griffiths claims he was “born for Ibrox” after his hat-trick in the 5-0 thrashing of St Mirren set Celtic up for next Sunday’s Old Firm derby.

The Scotland striker scored in the 18th and 44th minutes to put the Ladbrokes Premiership leaders on easy street and, after strike partner Odsonne Edouard notched in the 54th minute, he fired in a third for his eighth goal of the year and 11th of the season.

Midfielder Callum McGregor scored a penalty right at the end which, with eight league games remaining, means Neil Lennon’s side remain unbeaten domestically in 2020 and are now 16 points ahead of Rangers, who have two games in hand, the first of which is at Ross County on Sunday.

Griffiths is now looking forward to what he believes is a happy hunting ground in Govan.

The former Hibernian striker said: “I was born for Ibrox. I have never been beaten there with Celtic.

“I started there twice and scored twice in two victories.

“I am pretty sure the manager will know (my Ibrox record) but we have loads of players champing at the bit to play in a game of that magnitude.

“Whether the manager starts me or keeps me on the bench to come on as an impact player, I will be ready to go.

“I am not really sure (why I thrive), it is the same at Tynecastle as well.

“It seems to be a place that people hate (me) and I thrive under that pressure.

“Derby games are always games you want to play in and we will take it as it comes next week.

“It is just another game. We will go there and try to get three points.

“They will be fired up, they have not been playing well but they will want to prove a point against us.

“It is about us going there, being solid and making sure we come away with something.

“The starting XI will be up to the manager and the coaching staff and there will be probably another 10 players itching to get on the bench.

“He has a difficult job to do, we will wait and see what happens.”