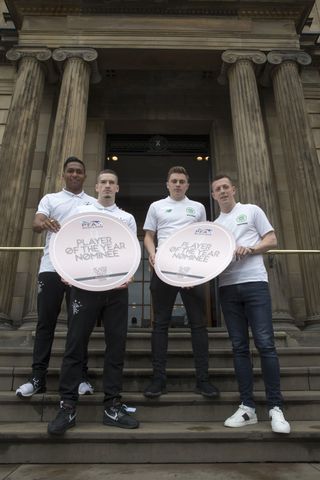 Celtic duo Callum McGregor and James Forrest will vie with Rangers pair Alfredo Morelos and Ryan Kent for the PFA Scotland Player of the Year award.

McGregor has already claimed two prizes at the Hoops’ annual awards bash, while Forrest has enjoyed another sparkling campaign that has seen him net 22 goals for club and country.

Morelos has had a season of highs and lows, with five red cards offset by his 29-goal haul for the Ibrox side.

Liverpool youngster Ryan Kent has also flourished during his loan stint with Steven Gerrard’s side, contributing six strikes for the Light Blues.

McGregor said: “To be nominated by your fellow professionals shows you are doing something right and people are taking notice of it. It is nice to be in the running.”

Forrest added: “It is a good boost. It shows that you have been consistent all season and it is good to be involved in.”

Kent is also up for the union’s young player award, going up against Motherwell’s Jake Hastie and David Turnbull, and Lewis Ferguson of Aberdeen.

The 22-year-old Anfield ace said on his double nomination: “It’s a great feeling. It’s been quite a tough season, a long season but to be nominated for these awards is an achievement in itself so I’m happy.

“I was optimistic coming up here. I was hoping to get good things out of this season and on a personal level it’s been a good year.

“It most definitely justifies my decision to come up here.

“I’ve had a lot of good exposure, domestically and in Europe. I’m really grateful to have been given the chances I’ve had by Steven Gerrard.”

Hastie is due to join Rangers this summer after agreeing a four-year pre-contract having impressed for Stephen Robinson’s team since returning from a loan stint at Alloa in January.

Yet it was Fir Park team-mate Turnbull who took home both the Player and Young Player of the Year gongs at Well’s recent prize giving ceremony having netted 12 goals since making his own breakthrough.

Ferguson – whose father Derek and uncle Barry both previously starred for Rangers – has also had a season to remember since joining the Dons from Aberdeen, including netting memorable goals against Europa League opponents Burnley and Gers in the Betfred Cup semi-finals.