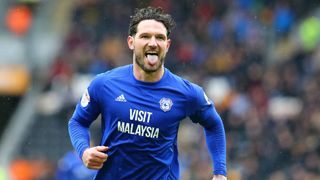 Cardiff City ensured the race for automatic promotion to the Premier League will go down to the wire, securing a 2-0 win at Hull City on Saturday.

Fulham had put the pressure on the Bluebirds by beating Sunderland on Friday, but Neil Warnock's side reclaimed second place in the Championship at the KCOM Stadium and hold a one-point advantage ahead of the final round of fixtures.

Elsewhere, Middlesbrough locked up a play-off berth, while Barnsley and Burton Albion celebrated huge victories in the relegation battle, meaning five teams remain at risk of joining Sunderland in being demoted.

Champions Wolves, who were held to a goalless draw by Sheffield Wednesday at Molineux, are already up and Cardiff remain in control of their own destiny.

Sean Morrison was their unlikely hero on Saturday, the centre-back heading in the opener and rounding off a counter-attack with 10 minutes to go.

Lewis Grabban rescued a point for Aston Villa in their 1-1 draw against Derby County, but Fulham's win on Friday means Steve Bruce's side have to settle for a play-off position.

Derby's draw means they are part of a three-way battle for the remaining play-off spot with Preston and Millwall, the former ending Sheffield United's top-six chances with a 1-0 win.

Millwall had a great chance to boost their own prospects at the Riverside Stadium, but Middlesbrough earned the points thanks to goals from Britt Assombalonga and Jonny Howson to book their place in the end-of-season lottery.

Burton Albion consigned Sunderland to the drop last week, and gave their survival hopes a further shot in the arm with a crucial 2-0 win over fellow strugglers Bolton Wanderers – Hope Akpan and Lucas Akins scoring the goals.

Barnsley moved out of the bottom three courtesy of a 2-0 victory over Brentford – who saw their play-off chances extinguished - with Kieffer Moore and Oli McBurnie doing the damage.

Reading were battered 4-0 at home to Ipswich Town and Birmingham City fell 3-1 at QPR, meaning both losing sides could yet face League One football next term.