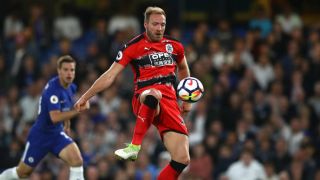 Marcos Alonso's fortunate goal helped Chelsea come from behind to claim a 1-1 draw at home to Huddersfield Town as the Terriers secured Premier League survival at the likely expense of Swansea City.

Chelsea's hopes of Champions League qualification required Antonio Conte's men to record a fifth straight league victory, but their chances of finishing in the top four now appear slim after Huddersfield clung on late to ensure their top-flight status.

Willy Caballero deputised for the injured Thibaut Courtois and the reserve goalkeeper's 50th-minute mistake gave the visitors a shock lead at Stamford Bridge on Wednesday.

Aaron Mooy's long pass sent Laurent Depoitre racing through on goal, the striker getting to the ball ahead of the sluggish Caballero and regaining his composure to slot into the open goal.

Alonso levelled in fortuitous fashion when Mathias Jorgensen cleared a cross onto the defender's head, with the ball rebounding in for his seventh Premier League goal of the season - and by far the Spaniard's strangest.

Chelsea - who somehow did not score in a late goalmouth scramble - must now hope Liverpool slip up in their final-day meeting with Brighton and Hove Albion on Sunday.

David Wagner and his team can start planning ahead for the 2018-19 campaign, with Swansea now needing a win against Stoke City at the weekend and a 10-goal swing in goal difference to overhaul Southampton.

Jonas Lossl had to beat away an early Alonso drive as Huddersfield sat deep, Willian then skipping away from Philip Billing to drill a shot wide of the far post.

Antonio Rudiger should have opened the scoring in the 12th minute, somehow missing at the back post after Cesar Azpilicueta flicked on a right-wing Cesc Fabregas corner.

Morata had another chance in the 41st minute when N'Golo Kante slipped him through on goal, but after rounding Lossl the angle was too tight for the striker to squeeze the ball home.

Another good opening fell to Rudiger shortly after the restart but he headed Willian's free-kick over the crossbar, Huddersfield immediately compounding that miss with the opener.

2 - Laurent Depoitre is only the second player to score both home and away versus Chelsea in the Premier League this season after Roberto Pereyra. Shock.May 9, 2018

The Terriers had not recorded a single shot in the first half, but when Depoitre - who scored in his side's home defeat to Chelsea - raced on to Mooy's long pass, beating Caballero to the ball, the striker was presented with a tap-in.

Conte turned to substitutes Olivier Giroud and Eden Hazard for inspiration but the equaliser came in bizarre circumstances.

Jorgensen tried to clear a cross from the Chelsea right but only succeeded in smashing the ball into the face of Alonso, Lossl left helpless in a carbon copy of Liverpool midfielder James Milner's Champions League semi-final own goal against Roma.

Billing rifled wide with 15 minutes to go as Huddersfield threatened to snatch all three points, but Lossl had to make a magnificent save from Andreas Christensen in the closing stages to leave the Blues rueing dropped points in their race for the top four.