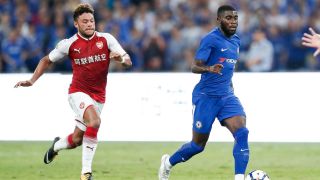 Chelsea have agreed to loan Jeremie Boga to Birmingham City as speculation mounts that they will sign Alex Oxlade-Chamberlain from Arsenal.

Midfielder Boga, 20, started the Premier League champions' opening-day defeat to Burnley and signed a new three-year contract with Antonio Conte's side before sealing his move to the Championship club.

The Ivory Coast international joins the huge number of young Chelsea players to be sent on season-long loans for 2017-18, along with the likes of Ruben Loftus-Cheek, Tammy Abraham, Michael Hector, Kurt Zouma and Lewis Baker.

The news comes amid growing rumours that Chelsea are close to signing Oxlade-Chamberlain from their London rivals.

It was reported in England on Monday that Conte's side have agreed a fee with the Gunners said to be in the region of £35million.

The 24-year-old, who has also been linked with Liverpool, has played all four of Arsenal's games this season, including the Community Shield clash against Chelsea, which Arsene Wenger's side won on penalties.

However, he is claimed to have told Wenger that he wants to leave the club and has rejected a new contract offer worth £180,000 per week.