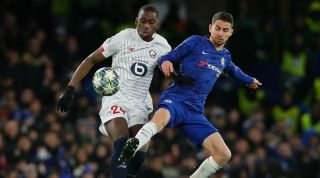 The Lille midfielder has this season emerged as one of Europe's most promising talents.

His performances in a Lille team that are fighting for a Champions League place have attracted interest from top clubs.

Manchester United, Chelsea and Tottenham Hotspur are all reported to be interested in signing the 20-year-old.

United are keen to replace an injured and potentially outgoing Paul Pogba and identified Soumare as a good fit.

Meanwhile, at Chelsea, there are rumours of N'Golo Kante looking to leave in the summer and the club are making preparations in case.

Spurs' signing of Gedson Fernandes has stemmed their immediate need for midfield reinforcements but with Eriksen on his way out, they were believed to be keeping tabs on Soumare.

But Soumare has put a dampener on his Premier League suitors' hopes by stating he doesn't expect to leave Lille this month.

Soumare is reportedly valued at around €40m (£33.9m) and is one of Lille's biggest asset since Nicolas Pepe left for Arsenal.

Chelsea and United were said to be leading the chase for the young Frenchman, but it seems that their pursuit may be over for now.

"I do not see myself leaving. I feel good here."

Soumare did, however, allude to the possibility of leaving once certain goals were reached.

"I am learning, we have big objectives to attain, like qualification for the Champions League."

Soumare has played in 18 games in Ligue 1 for Lille this season - which illustrates just how important he is to the French outfit.