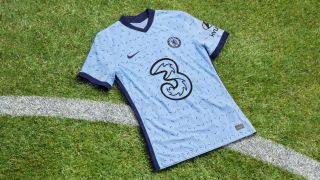 Chelsea's new away shirt for the 2020/21 Premier League season has been revealed ahead of the Blues' fixture against Crystal Palace on Tuesday night.

The match against London rivals Palace will see Chelsea sporting the light blue away strip for the first time, after releasing their new home kit last week.

The new shirt, which will be available to buy for £69.95 from July 29, is described as sporting an "Arctic Blue" colour, with darker shades making up a disrupted herringbone knit.

Designers say the shirt was made to celebrate London's long history of celebrated tailors – many of whom operate out of the famous Savile Row in west London, not far from Chelsea.

It's also claimed the shirt has "millennial swagger", showcasing the young talent at the club under Frank Lampard – with the likes of Mason Mount, Tammy Abraham, Callum Hudson-Odoi and Christian Pulisic all 22 or under.

Midfielder Mount praised the kit, revealing his eye for fashion. “The colours and pattern of the away kit work really well. It looks great and it’s also a nice contrast to the home kit," the 21-year-old said.

HOW TO GET IT You can buy the kit here from July 30.