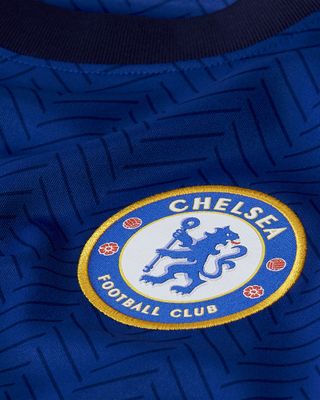 Chelsea FC have revealed their new home kit ahead of the 2020/21 season, with a darker, more minimalist design set to replace their current clobber from the beginning of next campaign. The launch date is set July 9, 2020.

HOW TO BUY IT Get your own Chelsea Match Home Shirt for £69.95 here

The official release describes the new design as "a luscious, textured, modern classic with the city’s rich fashion heritage woven in, wholly befitting the capital’s most stylish club." So be sure to mention that to anyone who picks fault with it.

Fans will notice a new sponsor on the front of the shirt. Earlier this year, the Blues signed a deal with connectivity brand Three to replace current sponsors Yokahoma Tyres. The new deal lasts (appropriately!) three seasons, with the upcoming campaign the first to feature the company's logo on all strips, including women's teams and academy sides.

“The kit is really, really smart - very Chelsea," Chelsea striker Tammy Abraham says. "You can see the story behind the kit with how it looks and all the little touches that remind you of a good suit.”

Nike's kit is made of highly breathable fabric, meaning sweat doesn't linger on your skin; keeping you cool and comfortable whether you're playing footy down the park or watching a game in the stands at Stamford Bridge.

According to the release, the kit is elevated by a Herringbone knit and garnished with bespoke flourishes.

If fans like the sound of that, they can even try it on before the official launch date. with the world's first ever AR kit launch. Fans can digitally ‘try on’ the home shirt from today.

To take part and try on Chelsea FC’s new home shirt, simply WhatsApp the words ‘virtual kit’ to +44747 656 1433 (UK residents only) and the automated process starts. The bespoke AI software uses your chosen picture and digitally maps the new kit onto it seamlessly. People will be given instructions on the best pose by ex-Chelsea legend, Joe Cole.