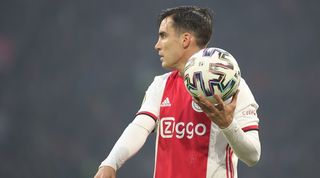 Chelsea are set to turn their attention towards Ajax left-back Nicolas Tagliafico after growing frustrated in their pursuit of Ben Chilwell.

Frank Lampard is keen to strengthen the left side of his defence ahead of his second season in charge at Stamford Bridge.

Chelsea had identified Chilwell as their primary target in that position but their failure to agree a deal with Leicester has led them to look at alternatives.

The Foxes are loath to lose their academy graduate and initially slapped an £80m price tag on the defender.

The club are believed to have softened their demands since then, but Chelsea are still ready to consider other options.

According to Sky Sports, the Blues are poised to make an offer for Tagliafico, who has been widely tipped to leave Ajax this summer.

Chelsea have made the Dutch outfit aware of their interest in a player who scored five goals and provided five assists in 38 matches last term.

The Argentina international, who is under contract at the Johan Cruyff Arena until 2022, previously starred in Ajax’s thrilling run to the semi-finals of the Champions League in 2018/19.

Chelsea are also keeping tabs on Real Madrid's Sergio Reguilon after acknowledging that their chances of landing Chilwell are now slim.

Lampard has already former Ajax forward Hakim Ziyech to his squad for next season, while fellow attacker Timo Werner has arrived from RB Leipzig.

Chelsea are also hopeful of acquiring Kai Havertz from Bayer Leverkusen, but the club are aware of the need to strengthen at the back as well as the front.

The Blues conceded more goals than any other team in the top half of the Premier League in 2019/20.

Lampard has not been convinced by Marcos Alonso and Emerson Palmieri, and securing the services of a new left-back is one of his priorities this summer.