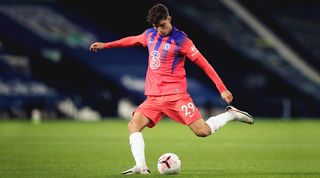 Chelsea could hand Premier League debuts to Ben Chilwell and goalkeeper Edouard Mendy when they welcome Crystal Palace to Stamford Bridge on Saturday.

The Blues are looking to return to winning ways after staging a spectacular comeback from three goals down to draw 3-3 with West Bromwich Albion last weekend.

In midweek, Frank Lampard’s side were knocked out of the Carabao Cup on penalties by Tottenham.

Both Mendy and Chilwell started in that game and should feature again as the Blues take on a Palace side smarting from last weekend’s defeat to Everton, which came after back-to-back victories.

Christian Pulisic should be fit enough to feature from the bench, but on-loan Palace striker Michy Batshuayi is unable to line up against his parent club.

Roy Hodgson also has to deal with the absence of the injured Jeffrey Schlupp, while Gary Cahill, James Tomkins and Patrick van Aanholt won’t recover in time to be selected.

Lampard will be hoping for an improved defensive showing from his side, who have already made three errors leading directly to goals in the Premier League this season.

One of those was from summer signing Thiago Silva, who wore the captain’s armband against West Brom last time out but was culpable for one of the goals his side shipped in a dismal first half.

Chelsea are at risk of equalling an unwanted landmark, as defeat on Saturday would see them lose the opening two home games of a league campaign for the first time since 1978/79, when they were relegated from the top flight.

However, history is on their side as Chelsea have won their last five meetings with Palace, who haven’t won this fixture since Hodgson earned his first victory at the club in October 2017.

Kick-off is at 12.30 BST and the game is being shown on BT Sport 1, BT Sport Extra and BT Sport Ultimate in the UK. See below for watching details where you are.