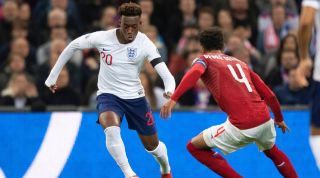 The 18-year-old was the subject of a £35 million bid from Bayern Munich in January and the German outfit are preparing a second attempt to sign him this summer, with Manchester United also interested.

The Times believes that Hudson-Odoi is determined to leave Stamford Bridge, but say he will not be let go even if he refuses to sign a new contract to extend his current deal, which expires next summer.

Chelsea have tried to convince him to remain in west London with a five-year deal worth £80,000 per week, but hopes of him signing it appear futile.

Defender Andreas Christensen claimed earlier this week that the club are not willing to sell any players in the summer as a result of a FIFA transfer ban that prevents them from signing any new players in the next two windows.

If Hudson-Odoi stays at the club without signing a new deal, he would become a free agent in the summer of 2020, when clubs could sign him for no more than a compensation fee that would be a fraction of his £40 million valuation.

Chelsea have appealed the transfer ban, imposed for breaking rules over the signing of foreign under-18 players, and will learn if they have been successful at a hearing next month.

Hudson-Odoi started his first England game in the 5-1 win over Montenegro on Monday, having failed to make a single Premier League XI all season under Maurizio Sarri.

He has made six league appearances this season, all from the bench, but has scored five goals in 13 appearances in other competitions.