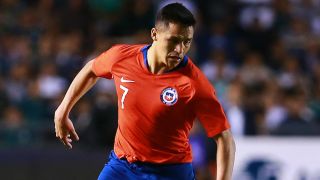 Alexis Sanchez netted his 41st international goal as Chile thrashed Honduras 4-1 in a friendly on Tuesday.

The nation's all-time leading goalscorer struck in the second half in Temuco, where Chile were awarded three penalties.

Arturo Vidal scored a brace before Alex Lopez pulled a goal back for Honduras, only for Sanchez to convert after having a penalty saved and Nicolas Castillo to net from the spot late on.

The win was a much-needed boost for Chile, who suffered a surprise loss to Costa Rica last week.

Chile only needed eight minutes to take the lead, Vidal on hand to tap in after Sanchez's header from a Jean Beausejour cross was saved by Luis Lopez.

Vidal blasted in a penalty with 10 minutes remaining in the half, only for Alex Lopez to respond for Honduras, tucking away an Alberth Elis cutback.

A handball decision led to Chile's second penalty on the hour-mark and Sanchez was denied by Luis Lopez, only to pounce on the rebound.