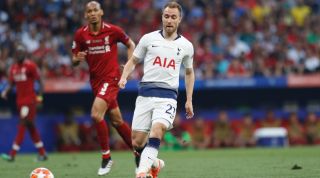 The Denmark international is in the final year of his contract at the Premier League club and has spoken of his desire to find a new challenge this summer.

A transfer fee of €60-70 million is said to have been discussed as the La Liga outfit look to bring in an attacking midfielder.

Real Madrid’s James Rodriguez has been heavily linked with a move to the Wanda Metropolitana, but Eriksen is considered as the first alternative to the Colombian if a deal fails to materialise.

Reports on Saturday claimed that Spurs are willing to more than double the Dane’s salary in a bid to keep him in north London, but they are still some way from securing an extension.