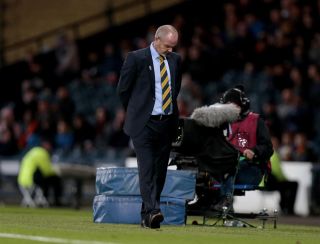 Scotland manager Steve Clarke set his players the target of finishing third and going into the Euro 2020 play-offs with confidence after admitting their automatic qualification hopes had died.

A 4-0 home defeat by Belgium made it four defeats from six qualifiers and saw Scotland drop to fifth place in Group I, nine points off second-placed Russia and one behind both Kazakhstan and Cyprus.

“It doesn’t look good where we are in the table now. There’s 12 points up for grabs and we have to make sure we finish third in the group, in terms of rankings and seedings.

“And if we finish third it will mean we have performed well, which should give us confidence going into the play-off games in March.”

“It’s not always about building, I’m not going to experiment in the next four games. I don’t have to experiment, I have to work with the players who are at my disposal and I have to try and make us better and certainly more resilient defensively.”

Clarke was hugely frustrated at the manner of the three first-half goals.

“We shot ourselves in the foot in the first half from our set play, 10 seconds later we are 1-0 down after nine minutes,” he said.

“It was a decent nine minutes, we started on the front foot again and pressed well, but then we have been heavily punished from two corner kicks.

“We spoke before the game, when you play against a team of Belgium’s quality, who are capable of scoring from open play, it’s almost imperative that you don’t concede from set-pieces and from three set-pieces we find ourselves 3-0 down, having played some good football in the first half.

“Even at 1-0 we didn’t buckle, we stayed strong, tried to press and move the ball, but it’s very difficult to try and sell positives when you have lost 4-0 at home.”

“It’s difficult to press Belgium because they pass the ball very well, but at times we got it right.

The former Motherwell midfielder, whose wife is Scottish, said: “I know it’s frustrating, I’m half Scottish and everyone knows how passionate we are.

“But international football is about having a long-term plan. This group of players have got the talent and desire to play for Scotland.

“The manner they have played in the last few games, it’s clear there are positive signs.

“This is a long-term plan for Scottish football and I think it’s bright if everyone can have a long-term vision.”