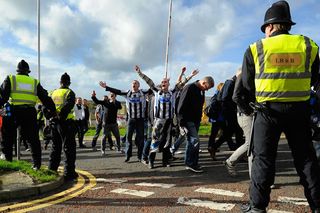 The Tyne-Wear derby is set to take place at Newcastle's St James' Park on February 1 at 12:45pm local time, however both clubs would prefer a start of 3pm or later in order to maximise ratings for broadcast.

Northumbria Police released a statement claiming they had no control over when Premier League fixtures started but a joint statement from the North-East rivals slammed the claims as 'false and absurd'.

"Over a number of years both clubs have made repeated representations to Northumbria Police to try and reach agreement over kick-off times to enable a traditional 3pm kick-off or later to enable broadcasters to give the game consideration in the majority of their time slots for live coverage," the clubs' response read.

"In recent years Northumbria Police have rejected every request made by the clubs for later kick-off slots including Saturday 5:30pm, Sunday 4pm and Monday 8pm.

"For Northumbria Police therefore to issue a statement stating that they do not direct changes to kick-off times is quite frankly false and absurd.

"In light of Northumbria Police's latest statement, Newcastle United and Sunderland AFC will now inform the Premier League that all future fixtures between the two clubs will be available for kick-off times to suit the clubs, the League and their broadcast partners, if applicable, and will expect Northumbria Police to police these games, especially given the considerable costs both clubs incur for such special police services."