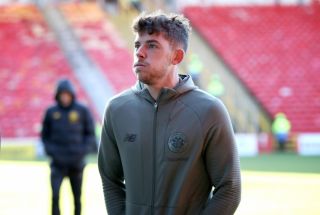 In the first-leg of the last-32 tie French striker Odsonne Edouard opened the 14th minute but Dame N’Doye levelled for the home side in the 52nd minute.

In what was Celtic’s first experience of VAR in a competitive game, Russian referee Sergei Karasev used a pitchside monitor to give Stale Solbakken’s men a spot kick in the 78th minute after a Christie hand ball.

The Great Wall with another big save 👏🧱#COPCEL#UELpic.twitter.com/BNDLt9R5n5— Celtic Football Club (@CelticFC) February 20, 2020

However, Forster, on loan from Southampton, tipped Jens Stage’s penalty on to the post and away – his fourth penalty save in seven this season – to give the visitors the advantage for the return game in Glasgow next week.

Christie, who will miss that game through suspension after picking up a yellow card for a deliberate hand ball,  said: “Yeah, I went straight up to Fraser after the game to thank him.

“It is incredible the amount of penalties he has saved.

“Every time someone steps up you have confidence in him to save it and it is pretty strange to have that.

“It did hit my hand, I am honest enough to say that but there was nothing I could do about it, I was so close and to get the yellow card is a frustrating thing.

“The referee booked me for a deliberate handball, it certainly wasn’t deliberate and now I’m the one who misses out again.

“It is frustrating and the whole game I had that in my head.

“I was keeping my composure and not jumping into tackles.

“It is frustrating to be on the wrong side of what I think is a tough decision.”