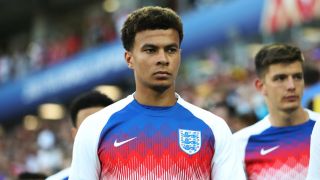 Dele Alli is adamant England manager Gareth Southgate's decision to rest players for their final group game against Belgium has not damaged "momentum" ahead of the World Cup last-16 clash with Colombia on Tuesday.

Belgium and England found themselves in the privileged position of already being assured of spots in the next round when they faced each other, and it was suggested that finishing second in Group G potentially provided an easier route towards the final.

Roberto Martinez's men ran out 1-0 winners thanks to Adnan Januzaj's sumptuous effort, but some have suggested that, although England arguably now fall into a slightly easier side of the knockout draw, the defeat has robbed them of momentum because of Southgate's eight alterations.

Alli is not having any of it, however, and is convinced the squad is just as fired up and confident as before.

"Firstly, we have to make it clear the whole squad is the 'A team'," Alli told reporters. "We're in this together.

"The boys played well [against Belgium]. The manager made a decision and we all back him. We didn't lose any momentum.

"We're all fighting and raring to go, and can't wait for the next game. It's important we react positively to the defeat. We know they're a dangerous side, but so are we."

Southgate should have a full squad of players to select from, with John Stones the only minor doubt and he is likely to be fine despite sustaining a wound on his leg against Belgium.

Colombia are expected to provide a stern test for England, though they have been somewhat hit-and-miss in the tournament so far.

Although they produced arguably one of the best team performances of the World Cup in the 3-0 dismantling of Poland, against Japan they lost 2-1 – albeit having played 87 minutes with 10 men due to Carlos Sanchez's red card – and were outplayed by Senegal at times in a match they won 1-0.

The fitness of star man James Rodriguez is a major concern after he suffered a muscular injury against Senegal. While it is not serious, Colombia are yet to confirm whether he will feature or not.

Should James miss out, Radamel Falcao will suddenly become even more integral, though he will not be out there alone, as Luis Muriel will be under specific instruction to ensure 'El Tigre' does not become isolated.

"One of the things that the coach suggests to me most is to not leave Falcao alone," the Sevilla attacker said.

"I must accompany him so that he does not expend too much energy against four defenders. Thank God we have understood each other well and as the games go by, the movements will be much better."

Quintero has arguably been Colombia's standout player so far. Whether or not James has been alongside him, the River Plate star has been a joy to watch and his imaginative passing range could spell danger for England's defence.

Given he has scored five goals from just two games, Kane is England's undisputed key man. The Tottenham striker has been lethal in Russia so far and he will surely fancy his chances of winning the duel with club-mate Davinson Sanchez.

- Quintero has been directly involved in three of Colombia's five goals at this World Cup, scoring in the first game and delivering an assist in the second and third.

- Kane has played 153 minutes at the World Cup but already only Gary Lineker (10) has scored more times for England in the tournament than the Spurs forward (five). If Kane finds the net against Colombia, he will become the first player to score in six consecutive games for the Three Lions since Tommy Lawton back in 1939.

- Three of Colombia's five goals at this year’s World Cup have come from set-pieces (two from corners, one from direct free-kick) while England scored more goals from dead-ball situations than any other team in the group stages (six).

- England have won only two of their last eight knockout games at the World Cup (v Denmark in 2002, v Ecuador in 2006). They had progressed in six of their eight previous games in the knockout phase.

- England have only failed to score in one of their 18 knockout games at the World Cup, that was against Portugal in the 2006 quarter-finals (0-0 after extra-time, 1-3 on penalties).